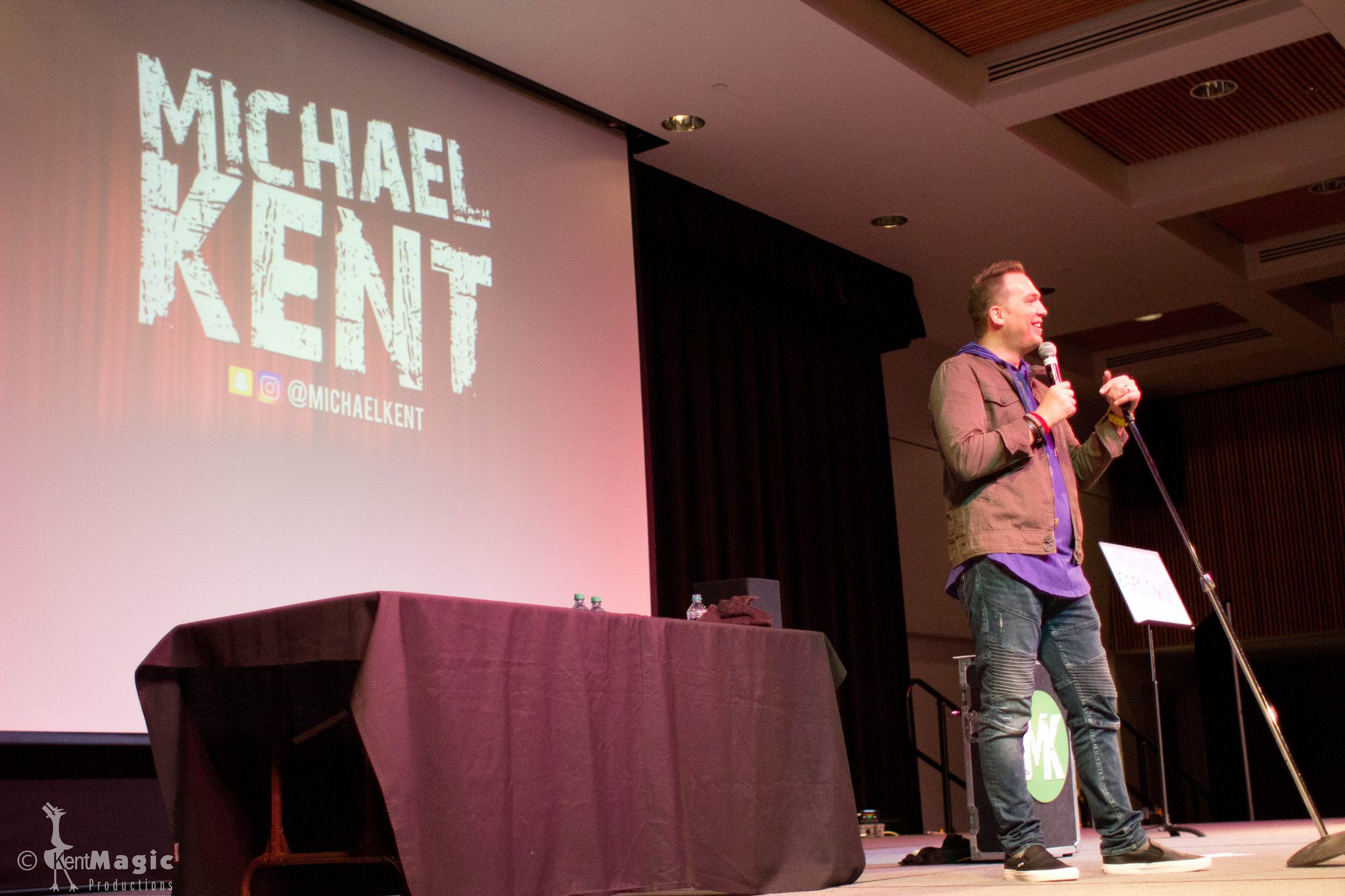 I’ve come a long way in my career and I am still learning every day. Along the road, there have been a lot of ups and downs that are natural with a career in the entertainment industry. I’ve put together a list of things that maybe would have relieved a little stress and anxiety had I known them beforehand. It’s my hope that this list is useful not just to magicians or to people in show business, but to all entrepreneurs.

1. Your audience will never be aware of 80% of the work you do in this business. But they would know instantly if you didn’t do it.

I recently spent 2 hours editing some bumper music so that it fit my show perfectly. The result? About 15 seconds

of music that plays in my show under applause and my talking. The audience never really hears it. But I wanted it to be perfect. And though they don’t recognize it, it contributes to the feeling I’m trying to create in the room. If I didn’t put in that work, the result wouldn’t be the same. The audience might not know exactly what it was, but they’d realize something wasn’t right. It’s about details. The same can be said for spending an hour shining the chrome on one of my props. They will never know I spent that time. But they would probably notice if I didn’t.

On a tour, 80% (or more) of the “work” is the travel and preparation. In show business, there’s an old saying that “We don’t get paid for the show. We get paid for all the work leading up to the show. The show is the reward.” Keeping this in mind, I never mind spending those extra hours working on the most minute of projects as long as they will contribute to a better show. NOTE: This includes education. Those months and years we spend reading the texts on our art are invaluable. Some of the knowledge we gain will not be directly useful to our art immediately. Some will never be directly useful. But until we study what has been done before us, we will never know if what we are doing is great.

2. If You Try to Be All Things to All People, You End Up Being Nothing to Everybody.

This applies both to show marketing AND to performance. What do you want to accomplish with your show? This was a question that took me years and years to answer. A more appropriate question for many young entertainers is “Who do you want to entertain?” Many inexperienced entertainers just want to perform so badly that they will accept any gig they can get their hands on. The results can be detrimental to business, reputation and to the ability to grow as a performer. This includes taking gigs that may be biting off more than you can chew, gigs for which your act is not a good fit and gigs that aren’t in a pay rate that matches your act (both above and below). If you’re kicking butt as a kids’ magician and have been for years, you may not be the best fit working at a corporate trade show where you may be out of your element. You may have developed a skill set that works for entertaining a specific set of individuals and those skills may not translate to other audiences.

As far as marketing goes, your target buyer must be able to envision you at their event. If I’m looking for a kids show entertainer and all of your promo has you wearing clothing with skulls, it’s probably not a good fit (and you might want to rethink your style decisions). Likewise, if I’m looking for a street entertainer and all of your promo videos show you performing in ballrooms for suited business people, I’ll probably go for the kid with the skulls. You can’t be all things to all people.

Knowing who you are onstage is key. And sadly, there’s no way to really know this until you have performed hundreds (literally hundreds) of shows. Another old saying is “Why be a second-rate version of someone else when you can be a first-rate version of YOU?” Consider this: If you perform a show that is truly YOU, no one will ever be able to duplicate that and you’ll be one-of-a-kind. For some people, performing as yourself isn’t an option. Some people are performing as a character onstage. I urge you to put yourself into that character. Make it an extension of you. Live through it. Then it will truly be unique, only because it will be you. With the hundreds of mannerisms, non-verbals, inflections and other nuances that make up our personality, an audience can tell if we are not being genuine.

I once had dinner with a comedy friend who passed some advice to me that he had received from Don Rickles. Rickles said, “The second you step foot onstage, the audience knows exactly who you are – sometimes even better than you do. And if what you say and do doesn’t match that, they’re not going to like you.” I still think this is great advice. I don’t take this advice to mean “change what you say and do to match the audience’s expectations” as much as I understand it to mean “make sure that you’re portraying an accurate picture of yourself onstage.” In everything you do, from the quickest phone call to the biggest project, be unapologetically YOU.

4. The beginning is probably going to suck.

Being self-employed, especially in the entertainment industry, is a job that requires a certain amount of ego. There’s a certain amount already there when we decided to make the leap into employing ourselves. Sometimes it prevents us from being okay with our failures. The tendency in the beginning is to react in one of two ways. We either get discouraged, or we put on blinders and ignore our mistakes. The second option here, which is the earnest beginning to delusions of grandeur, is a common phenomenon especially among magicians learning a new move in the mirror. During the part of the move that we’re not the best at, we tend to blink. Literally – many learning blink their eyes so that they experience the trick or the move the way the audience is intended to see it. This way we can imagine the way it’s supposed to look rather than see the reality of our suckiness. This is a truth as well as a nice metaphor. It’s really difficult, if not impossible to know how much we suck if there aren’t other people telling us. But we have to learn that failure is okay. Once we’re not afraid of failure, we can grow as artists. Stand-up comedians will be the first to tell you this truth. In order to be a good stand-up, a person has to be okay with going onstage and having a room full of people hate you. It’s going to happen. It’s the dharma of comedy – there’s no avoiding it. The difference between the good comedians and the ones who quit is that the good comedians learned from it and weren’t scared by how much they sucked. Ira Glass recently did a video talking about how even through we may not be that good in the beginning, there’s an underlying goodness to our work that has more to do with our taste and instinct. Check it out:

If we learn to keep a beginner’s mind about our work, we will always improve. It frustrates me to no end whenever I produce a new demo video. After the weeks it takes to get the video made, I look back at it and I’m never 100% happy. Mostly because since the video was shot, I’ve changed things in the show – improved things. And I always wish that I had the new, improved version in the video. But by the time I do the next video, there will just be more things that I’ve improved and it becomes an endless cycle. This cycle is a good thing. Sometimes I look back at the show I used to do and I can’t believe how bad it was. At the time, people loved it. But I know that it is so much better now. And in the future, I’ll look at the work I’m doing now the same way. I recently gave the following advice to a friend starting a business in a short amount of time. “You’ve got the rest of your life to make it perfect; now is the time to make it work.”

Getting to make a living, or even supplement a living with something you’re passionate about is rare. Not many people actually get to live their dream. There have been many 8 hour drives, 3 hour flight delays, insufficient sound systems, difficult promoters, and other headaches that have sometimes made me forget that. Those long hours practicing, learning, and editing a 15 second clip of music sometimes can drive me crazy. But I have to remember how amazing it is that I’m creating my own future doing something I love. It would be kind of nice to have some of those stress and anxiety-filled times back so I could enjoy the moment. And although this list is “Things I Wish I Would Have Known in the Beginning,” this is something that I constantly have to remind myself. This is rare. This is something special. And whenever you hear me complaining about it, you have permission to kick my ass.